To say that Cassius was stupefied was something of an understatement. Humans, in his experience, were afraid of vampires. A certain number even came to the castle to stoke that fear. However, when faced with the subject of their anxiety, they utterly failed to react. To what end! How, Cassius wondered, did a little old man evoke more fright than a legitimate vampire such as himself?

He continued to boggle as he scaled the steps of the belfry, only to be shaken from his reverie by a pair of arms encapsulating him at waist level. Cassius blinked before realizing they belonged to Lindsay, and that she was in something of a state. She clung to him, and though it did not come naturally to him, the vampire thought it best to stroke her back.

“Is everything alright?” he asked. END_OF_DOCUMENT_TOKEN_TO_BE_REPLACED

The city of Crescent Valley is named for its position below an arcing mountain range shaped on a map like the waxing moon. Home to over half a million residents, their numbers swell with the countless visitors that enter its limits every year; for during the days of its founding Crescent Valley was home to a being of legend, simply known to locals as ‘The Great Vampire King’.

Many are skeptical that such creatures ever walked among humans, yet cannot explain the great stone castle that sits above the city. Strong and silent, the structure watches them through the ages, though marks no time of its own, as the grand clock fixed to the central tower sits frozen for over a century with hands set at one minute to midnight.

That it had already struck and that a pair of vampires set it back was, for the purposes of keeping the peace, a fact that could be overlooked. END_OF_DOCUMENT_TOKEN_TO_BE_REPLACED

It wasn’t until she’d rested that Lindsay felt the full sting of her experience. She whined as Spike wrapped tape around her ribs with a skill greater than a small creature should possess, while the other two cried for her from the other side of the modesty screen.

Of course she could command them to use her name – the power of the Great Vampire King compelled them to her commands – but that didn’t seem right. Better they get in the habit themselves, she thought. Having leadership thrust on her was hard enough; being a ‘Master’ was next level. END_OF_DOCUMENT_TOKEN_TO_BE_REPLACED

Once Lindsay scoffed at Lord Nihilex, because she’d been lucky. She’d never been touched by evil personified; never felt its needles tear her from the inside out. She cried out, though her sounds were lost in the darkness, fading in the course a thousand tunnels.

Lindsay clutched her chest, as though to do so would keep her together. What little defiance she had ebbed by the second. Moments dragged for eternity. She convulsed, no longer aware of her surroundings; only the supernatural power that wrenched the life from her.

The torture ceased, but not by the mercy of Lord Nihilex. The taste of copper dominated her senses. Lindsay lifted her head, and through the haze could swear to seeing Fantom on his knees facing away from her. It was hard to tell in the dark. More curious still were the licks of smoke rising from his chest, same as it did from her jacket.

Lord Nihilex snatched Fantom by the collar and lifted him to his feet. Weren’t they on the same side?

“I’ve had enough of your insolence,” the conqueror snapped. “Stand in my way again and you’ll share her fate!” END_OF_DOCUMENT_TOKEN_TO_BE_REPLACED

Only those with an inflated sense of daring took to the mountains over Crescent Valley. The trees shooting from the slopes promised a thousand bloody ends to those who fell, long before they ever hit the bottom. For two vampires, however, the danger of gravity was an annoyance at best.

They moved from ledge to ledge with inhuman deftness, stopping only to scan for anything out of the ordinary. Cassius sniffed the air, searching for a trail only a wolf was attuned to. For miles they roamed, and would continue to do so well after the sun had set.

The blazer clad guardian lifted his nose in hope of a sign. In spite of his stoicism and resolve the undercurrent of dread ran deep. Though only a few short hours had passed it was time enough for the worst to unfold. The Fantom of present was without question equal in cruelty to the monster of memory.

“We’re getting closer,” Cassius told him, though it was a half-truth. No sign of Lindsay appeared in the ground they’d already covered, eliminating a handful of possibilities. That they provided no solid leads was a fact he kept to himself. END_OF_DOCUMENT_TOKEN_TO_BE_REPLACED

Vultera drew a card between her talons and considered the details on the wax-coated paperboard. It featured the likeness of a human male, little more than skin and bone, crawling on his knees like an animal. Below it was a transcription in the old tongue, from a time before humanity had words of their own. After some thought she placed it upon the table and slid it toward her brother.

“I play my emaciated type,” she hissed, “and use ‘feral bite’, adding plus two to my speed.”

Her monstrous sibling snarled and laid a card of his own on the table. It featured a wide eyed human female wearing naught but rags, mouth gaping in horror with limbs frozen. “I play my hysterical type in the defensive position and use ‘flee for safety’,” Feareus said. “I have evaded your attack!”

Their back and forth went on for some time, playing cards in the shadows above the throne room, where echoes could not reach. Though known to their father, the two regarded the passage a secret, insofar as it belonged to them. None had appeared to challenge their claim, until that moment.

“What are you doing?” Fantom pressed. END_OF_DOCUMENT_TOKEN_TO_BE_REPLACED

Crescent Valley was no longer the single street township to which Cassius and Luther were accustomed. Several generations had nurtured the ground level establishments into spires that reached for the sky with more windows than there were people. More fascinating still were the colors that saturated them on posters with bold script. And then there were the lights on every corner, inside every building, in all the hues of the rainbow.

Even the Great Vampire King, for all the wonders he possessed, would have stood in awe, and yet the residents of this place regarded it as mundane. Perhaps, given time, Cassius and Luther would do the same; but it was not to be this day.

Lindsay took them, one in each hand, and dragged them into a clothing store, the floor of which spanned several times the size of a paddock. Never in their life had they seen so many identical garments in one place, sized for varying body types, including their own.

“I… I don’t know where to begin,” Cassius said.

Luther regarded a nearby item on a hook. He appeared puzzled at first by the short sleeves, and more by the graphic printed upon what he supposed was the front. It was a caricature of an American bulldog with a spiked collar, surrounded by the words ‘WHERE MY DAWGZ AT?’. So affronted was he by this unusual garment that he could not even appreciate the softness of the cotton from which it was stitched. END_OF_DOCUMENT_TOKEN_TO_BE_REPLACED

Of all the joys to the twenty-first century, there are none greater than coffee and fresh cinnamon donuts. Though it wasn’t until she was halfway up the castle steps before Lindsay wondered if vampires liked either. Did they need to eat at all? Other than blood, that is. She discarded the thought as too gruesome before breakfast and pushed on with the power of caffeine.

Lindsay bounded into the clock tower – steaming paper bag in one hand, a tray of cups in the other – and was overcome. Two days was all it took for a pair of vampires and a little bat to perform a miracle.

The first time she entered the belfry it was musty, dark and strewn with cobwebs. All that seemed like a bad dream. Crates had been replaced by polished wood furniture and high backed leather chairs, which made a good home on the new planks they’d set. Even the inside of the clock face was wiped clean, along with the bell overhead that reflected the morning light.

She almost dropped their breakfast – almost.

“You guys did all of this?”

Cassius and Luther emerged from hiding. Both had their hair pulled back and were wearing aprons. Their lace cuffed shirts, however, were still in tatters, and only the worse after all their work. END_OF_DOCUMENT_TOKEN_TO_BE_REPLACED

Throughout history they were feared by humankind. Great warriors took swords to them to no avail. Barricades as tall as the sky could only delay them. The desperate fired cannons at the monsters with nil effect. Only when faced against supernatural foes did they ever meet a challenge, though two soldiers were as nothing against a swarm… in theory.

All of that changed because of her. What should have been a foregone conclusion was thrown into jeopardy because of her! The Great Vampire King had vanished from the world, but his spirit lingered in the form of a pathetic human, barely more than a child!

Lord Nihilex paced around the throne, and received a wide berth from those beneath him. When he growled, underlings knew better than to respond unless addressed.

“With my own hands I cast him into the deepest pit of the Abyssal Realm,” he railed, “yet still he resists! When will this cursed opposition end?” END_OF_DOCUMENT_TOKEN_TO_BE_REPLACED

Hi friends, and a huge shout out to the lovely folks at Passer Vulpes, who were lovely enough to include my contribution to their fictional advice podcast for monsters and those who love them – Supernatural Sexuality with Dr Seabrooke. 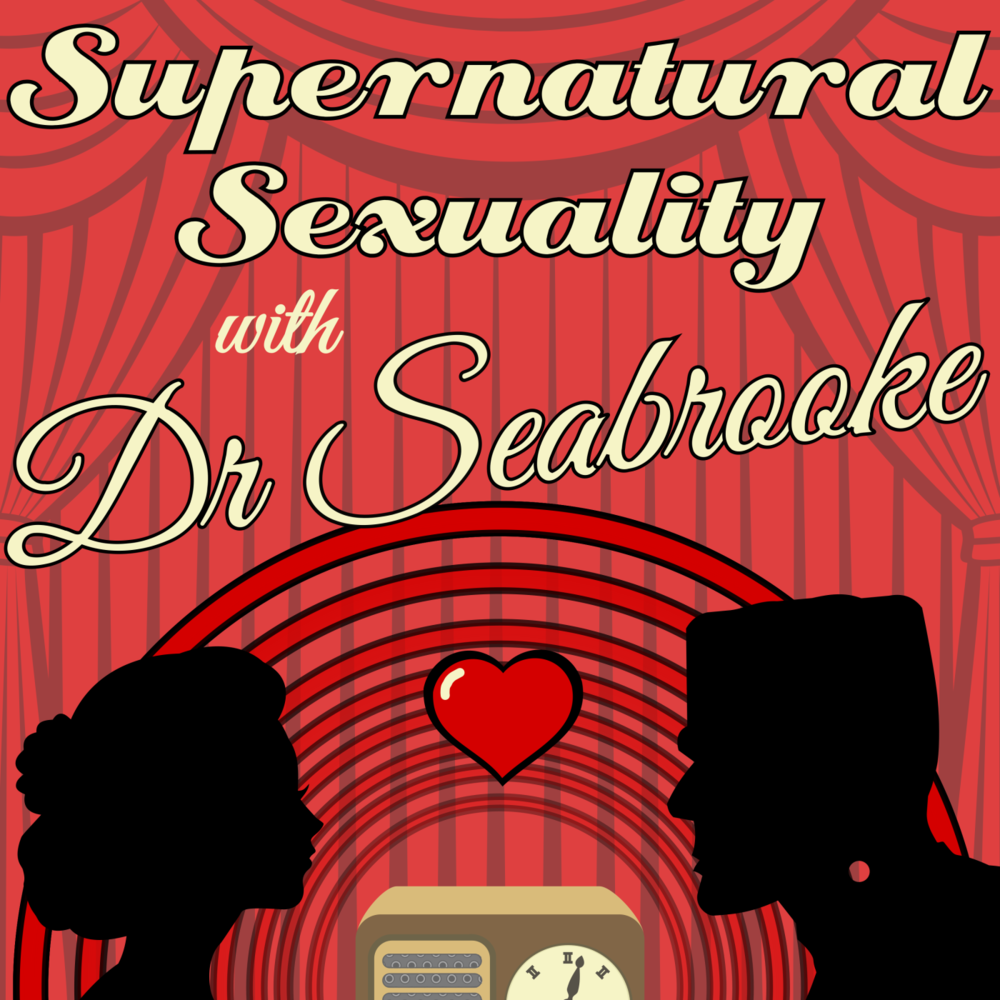 In episode six, Dr. Seabrooke receives an honest-to-god letter, helps with housemate romance, talks through relationship transitions (from alive to dead), and helps one man with some Unspeakable Horrors.

Tune in! Have fun!